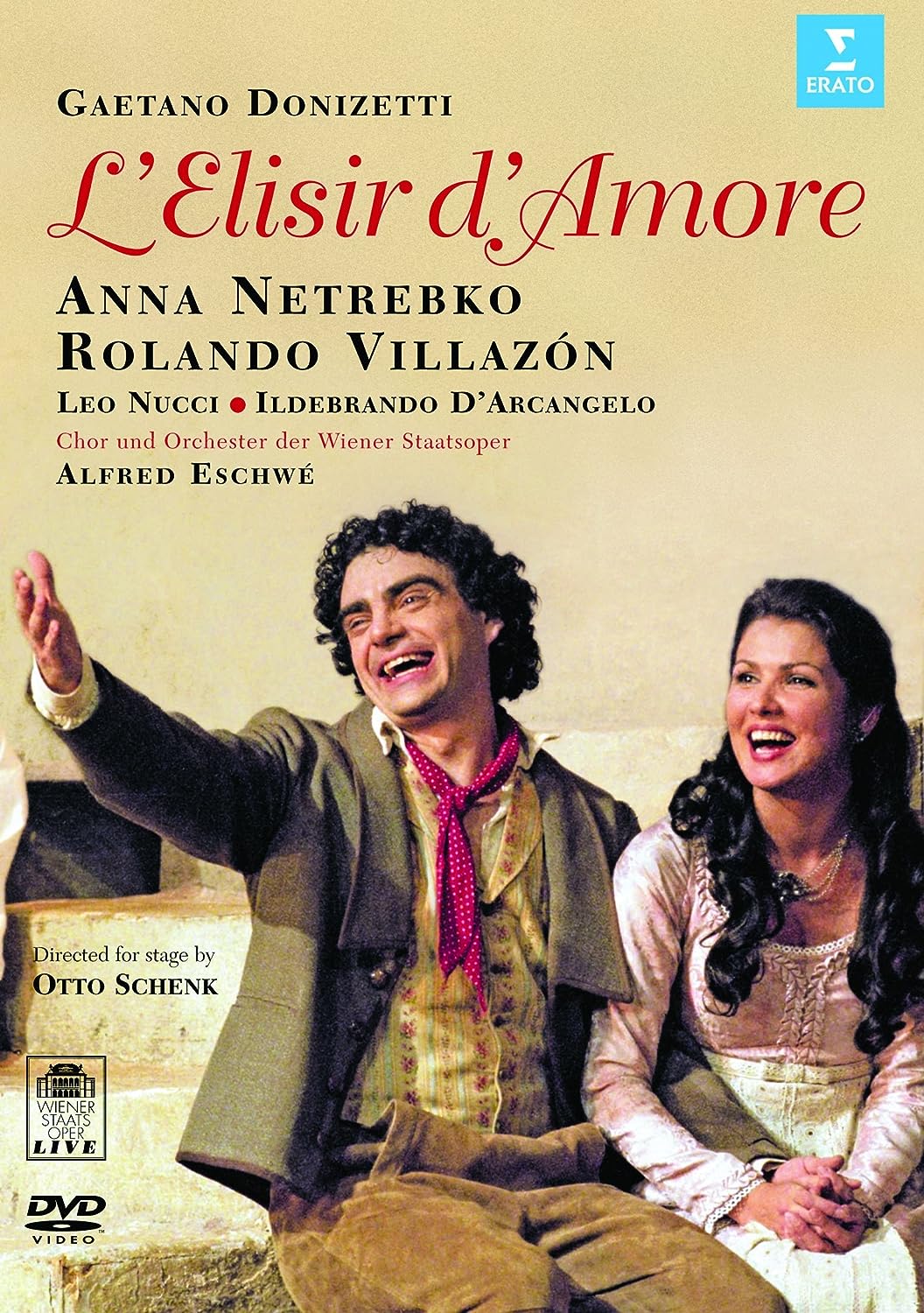 Donizetti's "i"L'Elisir d'Amore is one of the staples of the comic opera repertory. The plot hinges on whether earnest but dim-witted Nemorino will snag Adina, the flirtatious heroine. She's a tease who takes up with Belcore, an army sergeant, to make Nemorino jealous. After numerous (and humorous) plot twists that include a phony love potion, it all ends happily. Adina and Nemorino declare their love for each other, Belcore is dumped, and the fraudulent Dulcamara does a landslide business in love potions. It's all a fast-moving bundle of fun, especially with the star-filled cast of this 2005 Vienna State Opera performance.

The leads are magnificent. Rolando Villaz as Nemorino exhibits a real gift for comic acting, manipulating his rubber face into dozens of hilarious poses, flawlessly turning stock comic gestures into laugh-out-loud moments, and even juggling apples with the panache of a circus performer. More important, he uses his lyric tenor to sing the part with impressive subtlety, suggesting Nemorino's desperation while singing of his love for Adina. His big show-stopper, "Una furtuva lagrima," features melting pianissimos and a breathtaking decrescendo in its final phrase. It literally stops the show, the audience forcing a welcome encore. Netrebko's Adina is every bit as good, with deft acting and a lovely lyric soprano voice that makes you understand why she's the only girl for Nemorino. Dulcamara is Ildebrando D'Arcangelo, whose ample bass joins a stage presence that puts him at the center of his scenes. His famous duet, "Venti scudi," with Villaz, is the highlight it should be. Veteran baritone Leo Nucci is Sergeant Belcore and while his singing tends to the dry and effortful, he's convincingly sleazy, adding to the laughs. Smaller parts and the chorus are fine and conductor Alfred Eschw� efficiently keeps the music bubbling along.

Otto Schenk's production, with sets and costumes by J�rgen Rose, dates from 1980 but still looks fresh with a village square dominating the picture-postcard view of a provincial Italian village. The costumes are realistic, with predominantly pastel colors for the villagers, bright colors for Belcore and his soldiers, and relatively nondescript outfits for the others, though Netrebko can't help exuding glamour no matter what she wears. The video direction smoothly focuses on singers and the stage action, but the sound recording is overly resonant, with inconsistent dynamics and the chorus' words obscured. Still, this is the preferred L'Elisir d'Amore. --Dan Davis